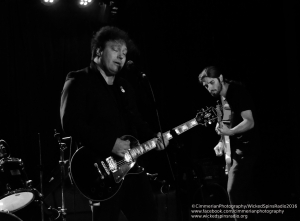 ”The sound was very good tonight, this was a good set!! There were a few people in the crowd who have been following the band for quite a while, but one of them was on stage playing bass, he was good he was! A different dynamic to the one I have been used to, no live drummer at the moment but the drum machine does it’s job! The vocals were as strong and  chocolatey  as usual, the bass accented, assertive and full! The new version of ”When The Lady Takes The Blame” is a prime example of this strength! The venue was not packed but there was a good crowd in, i’d say around 40 people!! Why Luxury Stranger are not playing to 100+ people on a regular basis is beyond me, they are one of the hardest working, dedicated and unpretentious bands around, playing gigs of around 100 minimum should be the norm!!!” 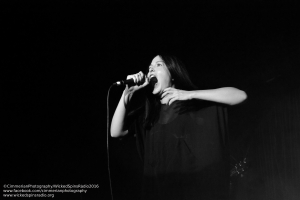 ”I have never seen Cold In Berlin before! I enjoyed the experience, they reminded me of Black Moth, a bit doom and shoegazey, Doomgaze i’d say!! The lead singer, Maya spent a lot of time performing in the audience which was tricky for me with photos, it was dark in amongst the crowd and I don’t use flash,  but both parties fed off of each other and the energy blew the to be mentioned rustiness off the surface!  I met Maya in the loo after and she said they were a bit rusty, I said that if that is what they sounded like rusty then what the hell do they sound like on top form!!? I will try and get to see them again when they play with Christian Death in October at the 02 Islington!!”

Both of these bands deserve your attention!!!